“The Tale of the Instant Coffee …

... or Confessions of a Seattleite”

Once upon a time there was a young woman who we will call Lucy. Lucy was a person who learned to drink coffee during those formidable college years when the balancing act was a challenge between happy hours and study time. Coffee became an essential tool for Lucy once she discovered it’s magical abilities to induce alertness after a few nights of minimal sleep.

Lucy’s love of coffee followed her into her career as a public accountant and she drank cup after cup of coffee throughout the day and evening without effect. Time went by and Lucy moved from career woman to stay-at-home motherhood—her love of coffee only waning during the first trimester of pregnancy when the smell of almost anything except orange soda pop was repugnant.

During this time a wonderful thing occurred. Lucy moved to the coffee capital of the world—Seattle. There she was soon introduced to a variety of coffee concoctions and ultimately landed upon her regular—the tall nonfat latte. Still, nothing could beat a fresh cup of coffee (or several) so Lucy’s coffee chugging days continued—until… 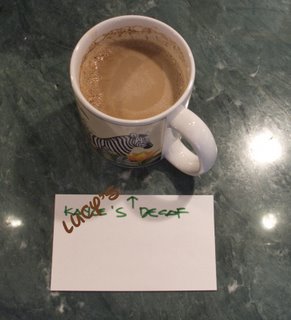 Aak! Bladder problems!! By this time Lucy had already made the move from regular coffee to decaf since she found that there might have been a slight addiction problem (e.g. screaming headaches when coffee was withheld). Decaf or no, Lucy continued to love her coffee and faithfully awoke to the aroma of a fresh-brewed pot each morning. Alas, the urologist said no more. Or at least no more than one cup a day if Lucy wanted to divert wearing Depends for a while longer.

Lucy discovered that it is next to impossible to brew one cup of really good coffee. Oh, she tried the coffee press. She tried drinking only one cup out of the pot, but each left her lacking. One thing Lucy found that she loved almost more than the taste was the actual warmth of the drink. So, while visiting her sister (not a Seattleite), Lucy stumbled upon her sister’s “fix” of (I dare say it)…instant coffee.

Once again, Lucy was hooked. She found that she could control the strength and, of course, the size of the “cup”, and soon the whistling teapot began to take the place of the dripping of the coffee maker. The aroma was always fresh and the steam was more satisfying than any lukewarm concoction. Now, you must realize that Lucy is only able to admit this shame to her closest friends and just to keep up appearances, she often orders in public her favorite “Seattle” drink—a decaf tall nonfat latte—extra hot, of course!

Thus, concludes the tale of the instant coffee aka the confession of a Seattleite. (Names have been changed to protect reputations.)

Hope that you never find yourself likened to a bad cup of coffee--cold and bitter!!

Posted by Kayce aka lucy at 5:41 PM No comments:

The unknown exploded and burst into a million miracles—glistening in the sky for all the world to see.
They floated through the sky, touching corners of the universe that had never known such brightness.

Come to the edge, She said. Come fly with me through the crystal atmosphere.
It is glorious. It is dangerous. It is life.