“As I started looking, I found more and more.” -- Valerie Steele
On a breezy evening that threatened rain, but offered amazing cloud formations and lighting, I attended my daughter’s graduation from high school. A monumental event for all, and one that arrived more quickly than a parent could possibly imagine. We braced ourselves for a potentially boring evening as nearly 400 graduates streamed into the stadium, paired off boy-girl boy-girl. The evening, however, flowed seamlessly as the class president opened with a simple statement, “Good job. We did it.” - followed by talented choral groups ranging from high brow classical to street rap.

The most lackluster speech of the evening was the one meant to inspire. The adult speaker literally said, “I’m going to inspire you” and then began to read a list of former graduates (mainly from the ‘50’s and earlier) who had “made it big.” I recognized one name of an actress I adored during the ‘80’s and my husband identified a real estate mogul who he’d had less than pleasant business dealings with. The delivery was dry and as my own eyes glazed over, I couldn’t imagine my daughter or many other students being inspired by this recitation. 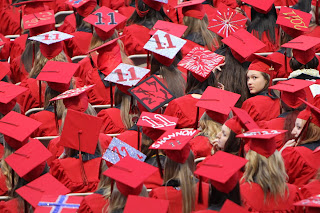 Looking out over the stadium, I was struck by the style and creativity of the students on the field. I witnessed mortarboards decorated with glitter and sequins glistening in the evening light. Students with oversized sunglasses; a boy with Mickey Mouse ears cleverly attached to his graduation cap. An array of finery peeking beneath red and black gowns: rubber sandals, glittering high heels, blown out blue jeans and pressed tuxedos. I watched the crowd: proud parents, raucous friends, and people holding elaborate signs, flowers from street vendors, cameras, bull horns and video recorders. In my musing, I became curious about who these people were, where they had been and where the future might carry them.

With curiosity the night came alive. Why did the seagulls soar over the crowd in the intricate patterns of swoop and dive? Who created the formation of night clouds and evening light that added a glow of perfection to the evening? Flashes of history went through my mind (good, bad and indifferent) as names were called to receive diplomas. Children I’d known since they were four years old strolled across the stage as the next generation of leaders. Later, I would pray for their safety and protection as they departed for Senior Spree, private parties and celebrations with family and friends. I wondered where time had gone, opportunities missed and adventures to come.

In my mind, the “inspirational speaker” had missed the mark. While a list of former accomplishments might or might not encourage others to move forward, curiosity could be a lasting companion. Curiosity inspires. It is my friend daily as I wonder about the world and myself. It motivates me to move forward and calls into question (without judgment) why I might stay inert. It encourages me to ask questions and seek new horizons. If I could leave a legacy for the generations to come, it would be this: Be Curious. Be grateful. Be you.

Ponder this: How are you inspired? What would be your legacy for those to follow?

photo by mark karras (used with permission... since he didn't get a model release and janey is featured :)
Posted by Kayce aka lucy at 8:39 AM

What a wonderful occasion for you all! And curiosity, I say Yes!

if that is your daughter with her head turned in the photo, it's an awesome photographic memory!

i love that your graduates were allowed the freedom to express some personal style and individuality. my middle son also graduated this year, but the students had a very strict "dress" and "behavior" code enforced upon them - the expected formal decorum extended to family and friends as well, to the point that anyone who clapped or cheered for their son or daughter as they received their diploma was escorted out of the building by law enforcement. it was beyond ridiculous, really. the bright spots were the speeches given by the valedictorian and salutatorian - funny, witty, irreverent, intelligent - a far cry from the dry speeches meant to inspire that i remember from years past. thank goodness for those saving graces in a sea of stern formality.

kel, that is indeed my daughter with her head turned. we are, of course, thrilled with the photo!

oh stacy - "beyond ridiculous" at a minimum! while i understand the need for order and some form of decorum at large events (& i'm assuming yours was large due to the enforced crowd control), this gives little room for creativity and celebration. they probably would have had to escort me from the room, because i'm not sure i could have held in my delight and excitement for my child... and why should we have to?

i was concerned that cheering and clapping could have made our event last for hours, however, the name readers were pro's and kept going so there became a fluid movement and really almost one constant cheer so each student was well acknowledged.

congratulations on your middle son's accomplishment!!

What a night for you... thanks so much for this.

thanks, christa. great to see you here!!

Beautiful post! My little one will graduate from 8th grade and start high school next year, while my eldest will be a senior next fall...you are right, the time passes in a blink!!!

Hmmm, what inspires me? Nature for sure, but people who are kind and excellent listeners always seem the wisest to me, for they are most fully present. I'm so happy to have landed on your blog today.

Congratulations on your daughter's graduation!

hey laura - you've got some big milestones of your own coming up, huh? your inspiring things are mine too. so, glad you landed here too!! thank you.

What a great photo!

Be you and if you're not quite sure who that "you is" - then be curious and fascinated as you begin your search. You will be rewarded and amazed at your true self!