Bandito on the Bus 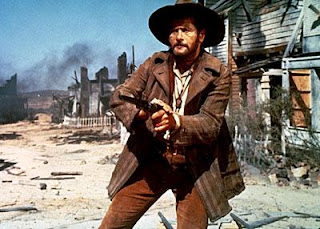 Riding the bus exhibits an infinite clash of cultures and gives the imagination an opportunity to run wild. On this ride I was seated near the back of the bus just behind the rear door. It was slightly later than the normal rush hour ride. At one of the first stops, three young women (teenagers, no doubt) boarded and were all giggles and conversation. They reminded me so much of my daughter and her friends except that their heads were wrapped in colorful scarves, they glittered with lots of silver dangling jewelry and rapidly spoke in a foreign language. I wondered about their nationality and smiled to consider that teenage girls are teenage girls regardless of their birthplace.

Soon, they exited the spot where they had blocked my view of a man I have fondly dubbed the “bandito.” He was straight out of a spaghetti western with his swarthy good looks and clothes of black. Instead of cowboy boots, he wore heavy black shoes that were firmly placed across the empty seat beside him. The seat faced the back door of the bus and put him at a great vantage point for me to observe.

There was nothing particularly remarkable about his behavior until the bus started to fill and he nonchalantly, yet quite defiantly, kept his leg across the seat. Dressed in black jeans and a black coat with a grey hoodie underneath, he sat and cleaned his teeth with the corner of a matchbook. He did not look up and no one seemed to even consider asking him to move his foot. There were no available seats and soon two young men stood in the stairwell by the door. One had a military haircut and a canvas computer bag slung across his body. The other had longish hair and wore the typical accessory of many riders—headphones—on his ears. Both looked like they were heading to work downtown. The bandito lazily pulled tobacco out of his pocket and rolled his own cigarette as others stood around him. He mumbled to himself that the bus driver had called a stop the Garfield Bridge rather than the Garfield “Street” Bridge and it really seemed to annoy him. He appeared very attuned to what was going on around him while at the same time being totally in his own world. 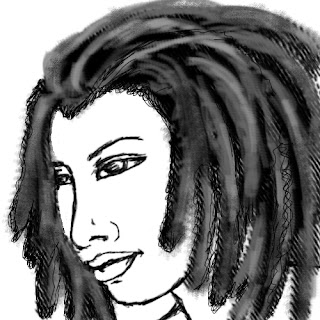 Finally another man came back toward the empty seat. He also had weather worn skin and wore long dreadlocks covered with a navy bandanna. His hands and fingers were covered with tattoos and it was hard to say whether he was going to work or possibly to one of the homeless missions downtown. Interestingly enough, the bandito looked up, nodded toward the empty seat and removed his foot so this man could sit down. They shared a few words (again something about the bus driver’s inability to name stops correctly) and then the dreadlock man exited at which point Bandito firmly planted his foot back across the seat.

It was such a curious interaction to observe. Shortly after his seat partner left, Bandito glanced around (I obviously was not in his direct line of vision) and pulled a very tall can of cheap beer from his pocket, popped the top and began to take covert sips between stops. I found myself wondering who he was, why he would choose to let one person sit by him and not others. Was he really defiant, oblivious or possibly just uncomfortable? I considered whether prejudice might play a role and finally I mused about what would lead him to sneak drinks of beer on a bus at 9:30 in the morning. Who was this mystery man? Was he as surly and self-confident as he appeared? Or was he just one more lonely person trying his best to make it through the day?

Today I will close with this lovely prayer from Christine that speaks well to my bus riding experiences.

Did you draw the dreadlocked man? I hope so, but if not, whoever did found a great partner in you being able to share your bus with me this a.m. Sunrise Sis

I love your bus stories. You seem so much more observant and less self-absorbed than I. Keep 'em coming, and meantime I'm going to try and open my eyes and look around me a bit more.

SS--i did not draw the rasta man...visual arts is not my specialty :-)

tess--it would be my hope that we ALL choose to open our eyes a bit more to the world around.