The following post was written yesterday after hastily pulling over to the side of the road. Very little editing has been done, so please bear with me. Some things just need to be recorded.

“I keep calling to you my baby blue, my baby blue.” --John Hiatt*
The sense of my father being with me this week is near overwhelming. Daddy died more than 30 years ago and while I still hold him dearly in my heart, he does not often enter into my daily thoughts—at least to the extent I am now experiencing. Driving down Hwy 101 near the Umpqua Lighthouse, I have had to pull over as there are tears streaming down my face for no apparent reason. The flow started while listening to John Hiatt’s song, “Baby Blue” which just showed up on my I-Pod song shuffle. None of this makes any sense right now, but the connection to my long-deceased father is undeniable for me. 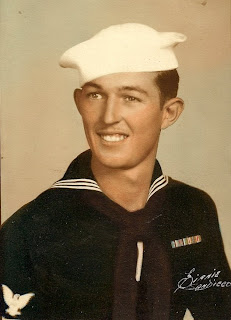 The recent ‘sense of my father’ began three days ago when my friend in Tiburon reminded me that he had promised to look up some Naval records for my dad. I quickly e-mailed my sister who is the current keeper of the family records and asked for the submarine information of Daddy. She put her fingers on the info immediately and responded to me quickly. Lo and behold that very day was our father’s birthday. Coincidence? I think not.

Today as I drove along the highway, I came across the Oregon Dunes that I did not realize even existed. There upon the sand were several dune buggies and I was immediately transported back to the days when I learned to drive and I used to go to the river bottom with Daddy and play in our dune buggy. I found myself wanting to rent an ATV and tool across the sands like I did a zillion years ago. My father was clearly present with me.

As I continued my route, I began to think about my last few days of driving. I am driving in a little VW convertible which is a newer version of the car I drove when I was 16 (a car I 'shared' with my dad.) I again am reminded of my father and that his final occupation in life was as a long distance truck driver. His blood runs through my veins. Yesterday I came to the conclusion that I really don’t like to make little stops here and there. I like to get in the car and GO. Yesterday I drove for several miles with my jacket on because I was not at a place where I wanted to stop and pull over. It reminds me of the years we drove back and forth between Oklahoma City and San Diego where my father’s family lived. Very few stops along that route!

Ah, San Diego. I realize now that the calling from my father began before his birth date on August 20. This road trip was originally conceived as a time to visit with my brother. Looking at a map, I found that San Diego is equidistance between Seattle and Bellville Texas where my brother lives. Curious that this place where my family lived before I was born (when my father was in the Navy) would be the place where I ‘coincidentally’ hoped to reconnect with my brother. Alas, he was unable to accept the invitation and thus the baby road trip was born.

Needless to say (for me at least), my father has been speaking to my subconscious for quite some time. I wonder what he is trying to say? I wonder what I shall learn from this? The sea calls to me. My father was a sailor. The road calls to me. He was a truck driver. “Baby Blue” calls to me. I was his “baby.” I am a grown woman now, but I am still his little girl. He died nearly 33 years ago on September 12, 1975. He would have been 89 years old last Wednesday.

*just a little aside…when I went to research these lyrics this morning, the first thing that popped up was john hiatt’s birthdate. August 20. btw—my father’s name is John. ☺

I certainly sounds like your father is trying very hard to get a message to you! You'll figure out what it is...you'll just know.

It sounds like this trip was about taking the time to be with yourself on the road. It was a good thing to do and perhaps you needed that solitude to hear the messages.

well you know how i feel about getting in touch with ancestors! :-) Sounds like this was just the trip you needed to make space to listen. xoxo c

Ooh, this is lovely Lucy.

The road trip was a must! A lovely post. Serendipitous would be putting it mildly:)

lucy, forgive me if i impose myself ... what i believe on you. this account that you've shared is so intimate and tender. i can't help but think that God is in the midst of all the supposed coincidences. it would be presumptuous for someone like me to go beyond what your friends have commented here, but i have to say that the recent season of your posts speak to me of the loving hand of God on your life. may you continue to open yourself to His leading and to His glory. thank you for sharing this part of your life here.

Isn't it wonderful when those we loved drop by unexpectedly to remind us they loved us.

kate--i think it was not only the solitude that was called for, but the combination of solitude on the open road. we'll see where we go from here.

C--you know this post would have been much longer had i incorporated all of my thoughts that have been inspired by walking alongside your journey :-) can't wait to share more with you!

laure--no imposition at all. i am delighted that you see the loving hand of God here. it amused me to realize that i had not explicitly mentioned God in this post since for me it is a given that God's presence is ALWAYS with me! sometimes that presence just shows up in more unique and unexpected ways than others.

i did a little catching up at your place and love your wandering and wondering. great images and posts!!! thx for stopping by & speaking up!

R--yes, it has been a wonderful reminder to know how much love is there!!!

As i read your compelling post, i think of your previous post on roots and vines. this connection with your Dad could be an enfolding, wrapping, caring place.. recentering, anchoring, reminding. It's amazing and i'm glad you had that experience!

Catching up on your blog and so glad I did! I had a reconciliation with my father once while on the road. It provides my lasting memory of him now. The healing of my mother's memory came while meditating in a church. In both cases, they seemed to be mediated by God. That's how it happens for me, at least. In all cases, I suppose, one needs the "space" that silence and solitude gives. Whatever you are given, hold it dear.

barbara--thank you for these glorious words. "reconciliation" & "mediated by God" particularly stood out to me as very appropriate in my scenario.

"whatever you are given, hold it dear." YES!

Hey Kayce... it's a comfort to me that you are experiencing your dad, knowing it's him, after so many years. My feelings are raw at this moment. I'm just so grateful you commented to me and shared this. Thanks and much love to you. Molly