It is gray this morning. I was expecting sunshine and it has not decided to arrive quite yet. There is a post bubbling around in my brain about roots and vines, but instead of letting the words flow out of my pen, I myself have remained rooted here in my cozy bed.

I sit here pondering about the serendipity of life. Is it God’s plan? Is it random energy or merely coincidence? Or is it something I make up in my brain to make sense out of things that otherwise might make no sense at all?

I wonder about the power of three’s and even where that idea even began. And lest you think I am on a total ramble, it is indeed the occurrence of three, serendipitous appearances of roots and vines that I am pondering. I hesitate in the writing, because words are not clearly forming yet the images stand bold in my mind and beg to be placed on paper and so I choose to give it a go.

Recently while having coffee with a dear friend, she began to relay an experience of her own. My friend has been experiencing a sense of flightiness and floating away and these senses have caused her some anxiety. In her story, she was seeking counsel and her adviser asked her to try and imagine herself as rooted to the ground with strong vines holding her in place. She has been curious about the imagery that was offered and was thus sharing it with me for my thoughts. While she spoke I tried to contain myself and continue to listen closely to her story. I myself was getting excited, because my heart did a little jump when she shared the imagery of the vines.

Why the ‘heart jump’? Well, just a few days earlier I was participating in an exercise called dynamic meditation where the goal is to exhaust the body and active thoughts so as to clear space to listen. (When I ‘clear space to listen’, it is my goal and hope to listen to God and I have found that God does indeed meet me in those spaces quite often.) Part of the exercise had us in an immobile state for 15 minutes. I must say it was quite painful physically and all my brain could do was attempt to figure out how much longer this would last and did not feel clear of thought at all!! ☺ However, when the music changed and we were given the opportunity to once again move, I found that my feet were planted to the ground. I could not move and actually had no desire to do the very thing I had been focusing on for the last 15 minutes.

As I stood there, a vision came into my mind of vines coming out of the ground and wrapping themselves around my right leg. They were beautiful like ivy and felt more akin to security than something binding or frightening. I stood there for a few moments and allowed myself to let the imagery sink in and then I physically reached down and gently unwound the vines so that I could move my legs and participate in the next part of the exercise. It was really a powerful experience on its own, and then to have my friend share virtually the same visual before hearing about my own was truly amazing. She and I both vowed to consider more what the imagery means for each of us. 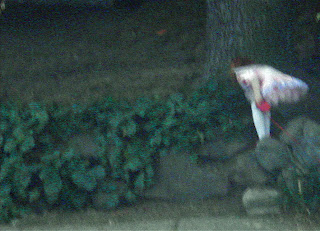 The third instance came when I impulsively picked up (& bought) a book (Dare to Journey with Henri Nouwen) on my way out of the bookstore yesterday. Here is an excerpt from the first reflection:

“So we try to do more while our energies ebb away and we become like uprooted trees with our roots wildly groping for the sky. Thus we anxiously throw our arms toward heaven, praying for extra grace and special enabling, when instead we should be planted again in nourishing soil. That soil is not meant to make us do less, but to change our priorities so that we take time to be still. And in the stillness, find new strength and hope.” --Charles Ringma

So, there you have it. My little story of vines, threes and serendipity. I am still pondering what to make of it, but I must say the grounding feels quite nice. As always, thoughts and comments are welcomed. Peace. ☺

This post is very rich for me, lucy. I'll just include one thought.
Sitting perfectly still in prayer, rooting oneself, as it were, is a transformative discipline. Mystics have written how they remained motionless for long periods of time. Long ago, I used to experience hours and hours of deep motionless prayer. It is not exactly that I could not move, but I certainly did not want to. I can only hope that those experiences may be repeated in my life now that schedules are not a recurrent factor.

barbara--so glad you found richness in this. i just returned from a walk and while going through my neighborhood park i noticed a woman standing perfectly still next to a tree. i had the image of her being one and totally connected with that tree. it was the sense of 'deep motionless prayer' of which you speak. may this form of prayer be something that you build into your new recurring schedule, if it is something you hope for. blessings to you!

very vivid imagery, lucy. personally, when something is confirmed in my life 3 times (from people speaking to me, something i read, something i see, dreams, something i hear, etc.) i take that as a strong, "knock-knock" from God. as i was reading your account, i also experienced a peace about the vines wrapping around your feet/ankles. i was also sensing that you are moving into a time of personal growth. i wonder if the vines had been given an opportunity to continue growing up around you ... how far they'd go? coming up from the ground and moving up from your feet i suspect that the growth is something more organic and foundational (not heady, intellectual, etc.) i also like the imagery of the vine because vines move as they grow and our feet are that part of us that move us in physical space. so perhaps there is something to consider about movement or moving. one last thought ... vines that climb need the support of structure in order to climb. i am inferring that you are a support to the growing growth. hmmm...i pray you'll receive discernment.

ah, synchronicities do tend to make one sit up and take notice

thanks for sharing the quote from "Dare to Journey", it's exactly what I needed today, while knocked flat with acute back pain - i feel like an uprooted tree with my roots waving in the wind

finding new strength and hope in the stillness

thank you, laure for those insightful comments on this post. i nearly shudder at the thought of MORE personal growth. it feels like all i have been doing for the last few years! but, hey, it has been wonderful and growing beats the alternative which to me speaks of death (both physical and spiritual).

"a support to the growing growth". hmmmm. i will have to ponder that one a bit more :-)

kel--thanks for stopping by. i am always delighted when i hear that someone has found "exactly what (they) needed" here. hope the back pain sorts itself out swiftly!

Aw,I love this post and your vision is beautiful, Lucy. I join with you in saying a big, Nooooooo!! to more personal growth :) But whatever has to happen, right?

Reading your post reminded me of a stencil one of the guys on my blogroll did a month or so ago :

Great post, Lucy! the quote hits the nail on the head for me... the need for being re-planted into the nourishing soil. the deep good earth with all it's minerals and warmth. deep winding roots absorbing and anchoring, and bearing the sweet fruit of stillness. NICE! Roots and vines... i think of safety, holding,protecting, securing. In your friends case and mine, a net of vines or roots would fit the bill for those of us who tend towards floating!

Such rich imagery. And the soil needs to be fertile in order to give the vines strength enough to support.

hbird--i had a great referral to consider the "root chakra". you might want to do a google and read a little more. it is quite interesting!

Lucy, I was dancing in the shower this morning to Son of a Preacher Man (in my head :) As you do. And I kinda had the moves, you know? Which was weird, because sometimes I just can't dance, can't get the rhythm. Other times, I get glimpses of why people love dancing so much.

I would LOVE to hear you walk about root chakras :)

sue--i went to my NIA dance class this morning. i always enjoy it but most of the time i feel a bit clumsy, but today for maybe about 2 or 3 minutes i felt really beautiful and light. it was way cool!!

"walk about" root chakras? am i missing a joke?