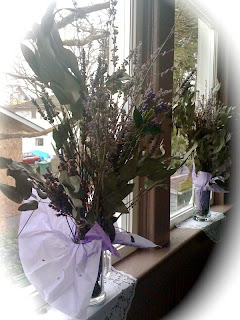 This morning my husband and I entered a church together for the second time in one week – not something we have done in nearly two years. Interfaith Community Church is simple and beautiful, reminiscent of a building you would see in a country pastoral setting rather than tucked amidst homes in an urban neighborhood. We could see the classic white steeple from a few blocks away. The sanctuary is two pews wide and about 12 rows deep. It is sparse with hard old pews and no flashy carpeting or stained glass windows. The thematic colors this morning were silvery sage with lilac ribbons wrapped around dried floral arrangements.

The room smelled of incense although for a moment upon entering, I asked my husband if it didn’t smell like marijuana ☺. A man of possibly 70 or 80 years of age handed us a bulletin and greeted us as we entered. I counted 12 people in total including the morning’s speakers. The room was to fill up to at least double that by the time the service began. Gong music played from a small stereo and candles were lit by the aging man and his spouse.

No one rushed over to greet us although several did nod their heads toward us in welcome. We were told more than once that every Sunday is unique and has its own theme. The service today was led by a woman who is a teacher of metaphysics and a Reiki master. She is very near my age and spent several years working in New Zealand and Australia while studying both Eastern and Western paths.

Her “sermon” began with the congregation performing the act of smudging to bring us into awareness of the room. We were asked during the process to consider where our minds were. Did we have judgments? Are we present in the room? Are we wondering what will come next? My mind went to my first “smudging” when we attended a parent workshop in Mexico. My thoughts mainly wondered what my husband was thinking about this church I had suggested. It was far from the traditional background with which we are more familiar.

Next we participated in a drumming exercise. I love drumming and while I brought my own drum, I chose to leave it in the car since I had no idea what to expect in this service. Hubby opted out of the drumming. He later explained that he wanted to just listen today. And so the morning went. It was filled with activities such as breath work (something I practice in yoga) and meditations, which I have done both on my own and in various workshops. All of the practices were activities in which I have found solace and clarity yet I have not necessarily placed them in the context of “church.” Hmmm…

This experience will take a little processing for me. Something seems to be stirring in me that begs for more community. I have become more and more comfortable with following the lead of my heart and coming to find that it usually trails to a pathway to God. In fact, most pathways lead to God when I listen closely. On Wednesday I received the mark of the ashes at a reasonably conservative church. God was there. Today, I received the smudge of the sage and cedar and listened to the rhythm of the drums. God was there. Like I said in my earlier writing, God just seems to keep getting bigger. This is already proving to be quite an interesting season of Lent and we're only five days in. Hmmmm...

Oh, this was Lucy at her finest - I loved this post! This new environment reminded me of your worship experience in the black neighborhood church that you attended - profound and powerful. I did have to giggle though when you mentioned the "smell of marijuana" - I've always liked that in a church:)))

Seriously, finding God in new places and spaces is a wonderful experience. Worshiping in the little church that we do here in Maui is so powerful. It's not exactly what we're used to, not exactly as we might expect every weekend - BUT we are NOT in charge, God is and we are so happy to be in the presence of worship and wonder.

Happy Sunday to both/to all of you:)
xoxo

You're gonna be an Episcopalian yet.
Love, Fr. Steve

Sounds like an experience of real meaning. I love your description. Aren't we (people) silly to try to confine God?

I'm back again this a.m. because I wanted to read the details re the "smudging" ceremoney and the tradition behind it. Very interesting. I think I had read about it before, maybe even here with Lucy.

Just wanted to point out - very gently - that I believe that there are conflicts between reiki and Christianity.

i enjoyed your storytelling of the experiencing of it

SS--i would love to hear more about "lucy at her finest." what do you love about lucy? writing class is encouraging me to find/define my writing voice...you can help :-)

CP--so, when would you like to attend a drum circle with me?

seeker--thanks...i read your entire linked post. i found it interesting although it didn't have much (any) similarities to this personal experience of mine. i appreciate your care.

kel--i would love to know what you enjoyed in my "storytelling." (see comment to SS above :-)

anybody else who wants to relay why they like reading lucy, fire away :-)

Re "Lucy at her best" are those posts that so visually express the experience in which you are engaged, the sounds, the smells, the almost beating of your heart. Some would find that uncomfortable - perhaps some readers would find this style of reading too personal, too much information, too revealing of perhaps their own inner workings. It's a vulnerability that is presented in a way that allows the reader to feel the moments with you.....

The church you spoke of draws me in even though I am a Catholic school teacher.

thanks, SS...you make it a worthwhile endeavor :-) xoxoxo

ripgurl--i have no doubt that 'even' a Catholic school teacher would be welcome there :-) thanks for chiming in!

it's not just the and this happened, then this, then this

there are little observations you make, or personal thoughts you had that you share, which is very relatable

kel--thank you so much for coming back around and giving me a greater glimpse into "my voice."