Discussions this week have led several times to the value(s) of Facebook and this technological age in general. While it would be easy to veer off on that topic at this moment, I am going to reign myself in for now and simply say: I love what happens when you toss something out into the universe (technological or not) and wait. Last night I put two words on my FB status, “glow worm”, and the above response showed up in my inbox this morning. It is the perfect intro to today’s post. Thank you, Country Parson!!

There are myths and legends around the world pertaining to what happens in the days of the full moon, many of them pertaining to bizarre happenings or behaviors. 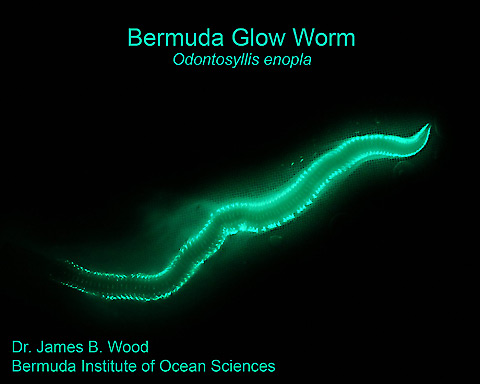 We arrived in Bermuda two days before this month’s lunar fullness and our hosts were reminded of something they witnessed a few years ago. The story goes that for three nights following the full moon in Bermuda at exactly 56 minutes past sunset, the waters begin to illuminate with the mating ritual of GLOW-WORMS. This frenzy lasts for approximately ten minutes (for three nights) and then subsides until the next full moon.

This sounds entirely too precise to believe, doesn’t it? 56 minutes after sunset??? So, not to be easily gullible we decided to seek out the luminous worms. Night before last, we ventured on our own to a nearby ferry landing following the big storm of the day. The precision was indeed there for at exactly 56 minutes after sunset, we witnessed one lonely chartreuse worm glowing in the water, although he appeared to be swimming circles inside of a transparent jelly fish. (I posed that he warned the others not to come out, lest they meet the same fate.) While we were slightly disappointed in the lack of numbers, it did not deter us from trying again. What better way to track a potential myth down than through the locals? So...

We found a Bermudian friend who declared a friend of hers had one of the definitive glow worm sighting spots. This time all of us went (including the teenagers since they were probably hoping to prove their crazy parents wrong.) Ten of us lined up around the dock waiting for the magic time. My husband was our official time keeper. Five Minutes. Four. Three. Two. One. Blast off!!! I kid you not. At exactly 56 minutes past sunset, two days after the full moon, the water started glowing and the frenzy began. Amidst clouds of love potion, the fluorescent green worms did their thing. We oohed, ahhhhed, shouted, “look look look”. It was amazing (and sad to say impossible to photograph)!! Hubby finally quit trying, put down his camera and said, “I’m just going to enjoy the show!” And, what a miraculous offering it was!!!

So, what do you think? Random? Precise? A fluke? God? All I know is I will sing that little diddy with a whole new appreciation!!! “Shine little glow-worm, glimmer, glimmer”!!!

Wishing you your own glimmering, glowing day!!!
Posted by Kayce aka lucy at 5:07 AM

Verrrrry cool story - would love to see that in person!....that CP....he's just full of interesting trivia isn't he?!:)

Jelly fish mention - reminds me, did you notice I had seen Seven Pounds?
Sad movie:((

This is the sort of thing that just makes my heart warm...don't know how or why...do know that I feel the enormity of creation...wow...

thanks for commenting, ladies. this was absolutely one of the coolest things i have ever experienced. it shouted (and glowed) of a greater existence!!!

karen, you said it well "the enormity of creation"!