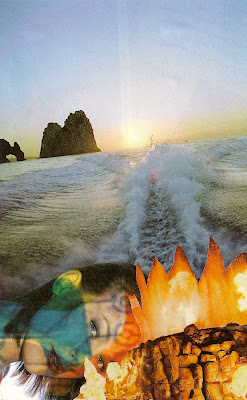 Something in this new year leads me to believe I should consider myself a “base metal” or raw materials, if you prefer. Hmmm. Will I be turned into gold? Or perhaps discover a universal elixir? I wonder what it would elix? ☺

This year’s introduction to alchemy came in a reader comment from Pollinatrix as I wrestled with letting go of my 2009 word, Fire, while welcoming Water into 2010:

“In alchemy, fire mixed with water transforms to create spiritual power. In fact, the marriage of fire and water is thought to produce Air.”

Next, I ran across an ancient myth about a sun-scorched eagle dipping itself into clear water. "(The myth) hints of resurrection, but also hints of alchemy. The fire of the sun and the clear water are opposite elements brought into harmony in a manner that elicits change.”*

There have also been other ‘hints’ that this will be a year of alchemy including the elements of fire and water. In honor of the theme, I created the shown SoulCollage® card to help ponder this marriage. I've also decided it might be time for a re-read of Paulo Coelho's The Alchemist.

I don’t know about you, but signs are popping up everywhere in regard to my word for the year. Today, I add alchemy as a secondary word to ponder for awhile. If you haven’t chosen a word yet, I highly recommend it. It’s a fascinating way to explore new horizons!!

I'm so glad you're enjoying this theme. It's definitely captivated my imagination for a long time.

I'm finding a secondary word for the year too - wisdom. And also now a color - orange - seems to be mine for the year.

I looked up orange and in chakra terminology, it's connected to the second chakra, and...water. Hmmm.

I've been thinking a lot about fallow periods, when everything is still and there's a quiet taking back of energy--and then boom, growing forth again--also a kind of resurrection. But now I'm intrigued with this idea--two melding into a different one...this is intriguing. I must ponder this.

Beautiful Soul Card, by the way! And I must search out my copy of The Alchemist--thanks for putting that into my head!

I am so enjoying your musings on words and the wonderful images that result.

My son is active in the healing arts and I gave him some unusual and beautiful crystals for Christmas. Now I'm thinking I might get some for myself so that I can reach (my word) and hold them and feel their power and creative energy.

Yes, I am living my three words.

Interesting that alchemy is coming up Lucy because it's one of my "secondary" words too. I'm taking a course right now called Mastering Alchemy and part of it is focued on using words (learning to create the "feeling" through past memories, of many different positive word)to change our feelings which in turn can change our life...hence the alchemy. It works too!

'The Alchemist' first recommended to me by Stacy at PI.....the first place I truely started the walk of Transformation in an earnest way....the Journey continues....thanks for the reminder and the your company along the way. Love, Pamela

pollinatrix - so many interesting symbols (& words) showing up. i wouldn't consider orange being the color associated with water. go figure.

karen - maybe we can have a little book club on "the alchemist". it's definitely worth a re-read.

it's also so easy to get stuck in an either/or mode, but i, too, am intrigued by the "melding" into something new.

maureen - i'm not really familiar at all with crystals, but i ventured to the beach again today and came home with more sea glass. i really love the feel of it in my hand; turning it over and over and wondering where it has traveled and what stories it has to tell.

kate - your alchemy course sounds positively captivating. i would love to hear more about it! i really wanted to make it to see you in 2009. oops. perhaps '10.

pamela - SOOOO delighted to be on this journey with you. now let's get a date on the calendar for that reunion!!!