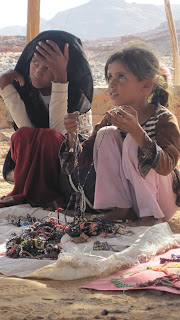 My posts have been long and filled with my journey to Egypt. I’m finding it nearly impossible to drift away from that place for very long – nor do I want to move away from it. As you might imagine, many things were stirred in me and it is in the “unpacking” that I find even more depth.

Recently, my group work has revolved around the archetypal energy of the empress and/or sovereign. There has been much conversation and exploration about what it means to embrace one’s inner sovereign. A question that seems to arise time and again in a “First World Country” (if I even know what that means) is the idea of how easy it is to claim sovereignty, power, health, privilege, etc. when these things surround us in abundance. What would happen if I were poor? Could I still embrace a sense of wealth?

Last week, when talking about the Empress and these questions were posed, one “Empress” became fully present in my mind. It wasn’t Queen Elizabeth or Michelle O’Bama or Melinda Gates, but rather a Bedouin woman I met in Egypt. By most standards this woman would be considered poor and living in poverty. But I had to ask myself the question, does she think she’s poor? 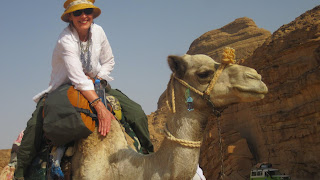 I encountered her as we were leaving the desert and dropping our Bedouin cook off at his home. The jeep I was in arrived later than the rest and we were asked not to disembark due to time constraints. The pull to leap from the car and mingle with the children, goats and others was strong and only our guide’s firm request to stay put kept us all in the car. However, in the brief moments we waited, this woman – indefinable in age 50? 80? 100? - approached our vehicle and reached her hand out to each one of us. Language was unnecessary as she took my palm in hers and offered me the gift of her eyes. This woman is an Empress – one who stands solidly in who she is, invites others into her realm and does not know the meaning of scarcity. She is sovereign over her world and makes sure that those within her kingdom are welcomed. 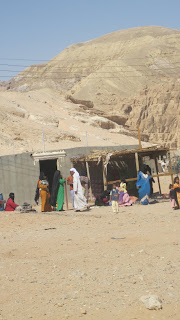 She has given me much pause to consider what my own inner Sovereign looks like and what she values. Is it jewels and extravagance? Even that is hard to ask, because my definition of those two things is shifting. The jewels I value most right now are a few stones, a fossil and a piece of coral. Extravagance is resting under a billion stars with only a sleeping bag to shelter my body. And my Empress? Well… her sovereignty lies in a castle that looks quite different from the fairy tales.

Ponder alongside me, won’t you… Where does your Sovereign reside? What are the jewels that wrap your Empress or Emperor? How do you define wealth?

Ye gads, woman--there are no quick stops to your blog!! So many beautiful, deep thoughts to ponder!!

Karen is so right. And sovereignty is about dignity, inner strength that supports that freedom.

Is there a sovereign without a community/tribe/family to acknowledge her? The issue of community is foremost on my mind these days, I am afraid.

karen - you, my dear, are the epitome of the empress. she oozes freedom!!!


barbara - sovereign without a community/tribe? you bet. i imagine you've got a whole tribe congregating around your own inner table, don't ya think? monk... artist... poet... kitty mama... scientist... empress.

it's all about standing fully for who YOU are, not about ruling over others. it's about "dignity and inner strength that supports freedom". are you in?

If you put it that way, lucy, I certainly recognize those dinner guests!

I have been challenged recently on the solitary lifestyle I have grown into since retirement. I feel quite content and am, at my own pace, opening up again after a period of retrenchment. Perhaps I am fooling myself, though. That's where I was coming from, lucy. Time will heal all small scars, so not to worry.

Thought-provoking questions I'm not sure I have coherent answers to. The Empress in the Tarot is one of my favorite cards, as she's the archetypal mother, but I like the way that in most decks, she's also got a queen-like appearance. I've been thinking a lot about the archetype of Queen lately, and am in fact being a queen for Halloween.

About poverty - it seems it really does boil down to how one feels inside. I've been poor by American standards my entire adult life, but have only felt it as such when I've compared myself to others.

I'll have to do some work on the inner sovereign concept for myself....I am so in tune with the idea of freedom and being who I am/who I want to be - yet where would that freedom be if I was in poverty, in control of a male partner, etc.....I want to believe that I could still be my own person - yet?

This is a GREAT topic!

Another thought - you're in white clothing in your photos - cool/cooler? Practical/impractical? Another topic:) I can't wait to share all of these memories with you in person!

polli - i hope you take pictures of your queenly self at halloween. i know you'll make a royal Empress(ion)!

SS - i've had lots of fun with the empress this month. i also introduced her in soul collage and she was quite specific in how she wanted to appear! i think the internal sense of freedom is key here, much more than outer trappings, etc. although... i have found myself drawn to lots of sparkly items and jewels lately. AND many of my favorites are the Bedouin beads i collected in egypt - not "precious" jewels by worldly standards, but entirely precious to me!!

re: the white... definitely cooler than my other favorite "neutral" of black. it ended up being more practical than one might think... yes, another topic which we can discuss among others in person - hopefully soon!! xoxoxo

"How do you define wealth?"
excellent question