Slowly, slowly I am revisiting my desert journals and bringing the pages to light. The following words were written the day after climbing Mt. Sinai while continuing our visit at St. Catherine's Monastery. 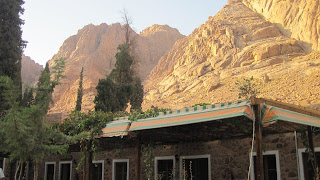 Time does strange things here, and we haven't even gone into the raw wilderness yet. We lie wrapped in cocoons of comfort - warm beds, air-conditioning, a roof over our heads. We are wandering, yet... Something ties us here. What? What do I mean? Let go. I'm tied to my watch and the sense of a certain number of hours of sleep I need. I am tied to the group and the roommate who sleeps beside me. Tied to the convention of the world - the rhythms of others.
I awoke sometime during the night and thought it was morning - thought my roommate was already up and in the shower. I felt rested and ready to start the day. Then I looked at my watch and saw it was still the middle of the night, so I "knew"/thought I should go back to sleep. A similar thing happened the night before. I awoke feeling as though I had slept for hours and realized it had been maybe one or two. Am I so stuck by conventions of time and space? What does it take to let go?
What does all this mean? In Paris, I found my own rhythms - some nights I watched movies until the wee hours. Others I slept early in the evening. Yesterday, a quick nap after climbing Mt. Sinai felt like ten hours of hard sleep. Is that the timelessness of which we speak? Where the telling of a story days before combines with the clicking of hiking sticks to become weaver's needles and our pilgrims' steps of today merge with centuries of others' who have gone before? Did our climbing footsteps encounter the imprint's of Moses? Was my hand holding the palm of an ancient Egyptian or perhaps even God herself when I pressed my fingers into the stone inside the pyramid? 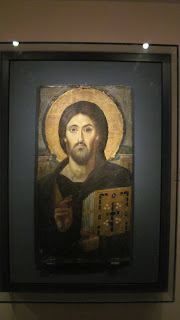 The messages are myriad. Can I decipher them or am I called to let the mystery be? What is truth? Truth comes in moments. It came when I looked into the eyes of the Sinai Christ and know he beckons me. When my fellow pilgrim hours later described the same experience and in one moment we know and we are known. Truth comes when I hear our prayer warrior describe her call for us to have the angels lift us up when we are weary and I remember and know those angels were there. Truth arises when our resident yoga master subtly mentions @ Camelot - "Do you know why camel pose is called camel pose? It's not only for the hump, but also for the kneeling," and then I share with her my "camel" journey over the past months - struggling, breathing,being curious and ultimately having two beautiful camel poses the week before this trip. In that moment, she knows why she said those words to me and not someone else. We are united in ways we cannot fathom.
"I want to hear, and I want to be heard,
I want to eat, and I want to be fed,
I want to be made whole , and I want to make whole,
I want to be united, and I want to unite." Acts of John - Christ Hymn - 3rd Century CE 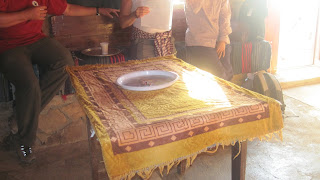 The longings of our heart cross centuries - cross time. Some say there is no such thing as time. The weaving of the tapestry - the carpet laid out before us by Abraham in his tent at Camelot. We are being woven together in a new story. This sweet band of pilgrims.

Have you ever experienced that sense of timelessness? Those moments of truth where words are not needed to 'Know'? Yesterday, a friend asked me what was the gift I received in the desert. Timelessness was the word that rose to the top. Timeless Truth.

A couple of times in my life, I have spent hours suspended in timelessness. At the time, it seemed as if I were the yolk in a hard-boiled egg. Quiet, soft, protected. If I talked or moved, it was veeeeeeery sloooooooowly. Hasn't happened recently, not in decades, really. I miss it, though.

thanks, pammie - always good to have you here!! xoxoox

barbara - when we were in the desert, our motto was "slowly slowly" :)

Truth, what is it?

The definition of 'truth' is 'opposite of error'. Truth means it is conformable to fact. It is correct.

Truth in action, is when the human conscience agrees with the intellect. Truth is 'ONE'. There can be only one truth, (John 17:17-23).

Any variation in the one truth is not truth at all, but error.

So how do you test for the truth? I have already given you the answer in the first paragraph. You have to look for error, and you have to see if the truth is conformable to fact. Here are some guidelines. Consult your conscience as you follow these pointers...

1. Have you felt uncomfortable (conscience speaking) with some Bible verses that do not seem to conform to the teaching of your Church? All of Scripture is harmonious and it all should fit together like a giant picture puzzle.

2. When you do question some teaching, do you get definitive answers every time?

3. Do you get meaningless or nebulous answers that don't make sense?

4. Are you absolutely sure that you are in the Church that Jesus Christ founded? He only founded 'A' Church in Mathew 16:18. That verse does not say 'Churches'. I am reminded of 1 Cornthians 10:12, "Therefore let him who thinks he stands take heed lest he fall."

5. There are over 33,800 different Christian sects in the world today. How can you be sure you have chosen the right one?

6. Remember, 'TRUTH IS ONE', so how can there possibly be 33,800 different Christian Churches, all teaching that ONE TRUTH?

7. If all those Churches taught the same truth, then there would not be 33,800, but only one. What does an examination of conscience say now?

10. The Church of truth is spelled out in the Bible. It is the only Church that was given the authority, the one in whom the Holy Spirit dwells forever, John 14:15-17.

11. "But he who does the truth comes to the light that his deeds may be made manifest, for they have been performed in GOD", John 3:21. This verse says it all.