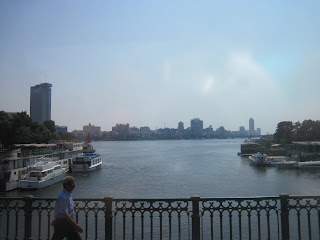 Cairo was right outside my car window although I could have been in any city in the world for all I could see. Behind the cover of darkness, Ancient Memphis spoke to me. It felt like we were traveling on a major highway as lights and billboards whizzed by the window. My fellow passenger mentioned something about the "ring road". Simultaneously images of "the Loop" surrounding Houston, Texas entered my mind. Later, I would learn my instincts were not far off as Ring Road circles the outer edges of Cairo thus bypassing the slower, more crowded inner city streets.

We approached an area where the lights spread out and calm descended on my soul. I noticed tables set up along a sidewalk and people milling about enjoying the warm evening air. What was odd was the tables weren't set up along storefronts and their backdrop was solid with only a spattering of light. It was a curious scene for me to witness, all in the matter of a few seconds. Before I could ask where we were, the surrounding streetlights thickened again and my companion said matter-of-factly, "You've just crossed the Nile." 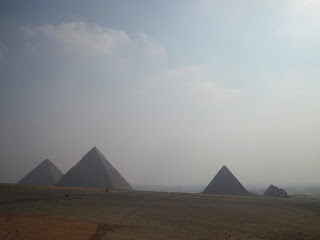 What? You're kidding me? I've just crossed one of the greatest rivers in the world and no one told me until we were past it? My disappointment swelled, and my senses tingled because I knew something great had just touched me. The immensity surrounding me was tangible, even though I couldn't see anything other than dots of light pockmarking the indigo night. Later, I would learn that in the daylight one can also see the pyramids of Giza from the route we were on. Those giants had hovered over me in darkness, not dissimilar to Mount Rainier guarding the city of Seattle and her surrounding towns.

Thus the mystery deepened. The water of the Nile called to me like the sidewalks of Paris. I longed to sit and gaze at what I knew not - to join the locals at their wrought iron tables and feel the warmth of the night air wash over my tired bones. I imagine to gaze at the Nile is to feel the streams of eternity. The pull of the water was like the movement of tides. Even under cover of darkness, I knew something was there. The tug was tangible - not unlike my call to come to this faraway place. Was I witnessing my year of water co-mingling with this desert environ? 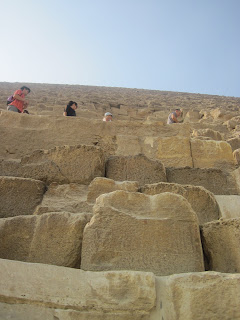 I read once that the things we are drawn to are pieces of brokenness unbreaking back together. Unbreaking back together. Was this a moment of 'unbreaking' for me? By crossing the Nile was I gathering puzzle pieces of my existence? This trip found me on the edge of moving and flowing with water's adaptability which is not unlike sand's. Just when I think I have things all figured out or there are no more spaces to fill, another drop or grain shows up. Sometimes I am filled to the top and overflow. Those are the moments of wholeness when I am connected to the universe with every atom of my body. Instants profound, yet fleeting, because I shift ever so slightly and let my humanity slip in through anger or disappointment and the water spills or dries up or the sand shifts and blows away. Is the moment gone? Or can I experience it as offering more room and space to gather and heal my brokenness? Early in this journey, the moments were already aligning like the giant stones at the base of Giza.

As you walk through your days, I invite you to notice how the moments align. Perhaps they are only recognizable in hindsight, like my realization of the Nile. How will you be present to what surrounds you even when you cannot see?

When I was in NY earlier this year, I spent hours at the mummy exhibits. So fascinating. To be in the place of the pyramids must be stunning.

What I love almost as much as your wonderful words is that I was experiencing this alignment of moments last night and was just going to journal about them, then stopped by here and felt like your words helped strength the alignment. Write on dear friend.

Your post reminded me of my first seeing the St. Lawrence from my flight over Montreal. It was like molten gold in the late day's sun. In St. Louis, where I attended grad school, it was the mighty, muddy Mississippi that held me in awe. It is the constancy of its ever changingness that gets to me. Rivers are powerful, even when you cannot see them.