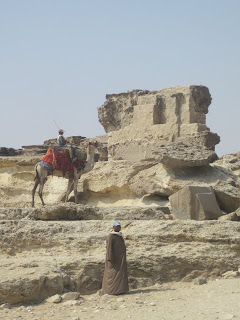 "When you travel,
A new silence goes with you,
And if you listen, you will hear
What your heart would
Love to say." John O'Donohue
9.24.10

Today was a day spent learning of the reverence and preparation for death and ending with the celebration of new life through marriage. Two weddings graced our presence as we moved from the Pyramids Park Hotel to Novotel. In between were times of laughter, illness, crowded spaces, ancient wisdom and miles of forged friendships.
We started the day at the Pyramids of Giza. Pinching ourselves, we couldn't believe we were standing on the ground of the Pharaohs. The massive structures rising out of the rocky sand. How DID they do that? Three large pyramids flanked by three smaller for the wives and three more for the mothers. 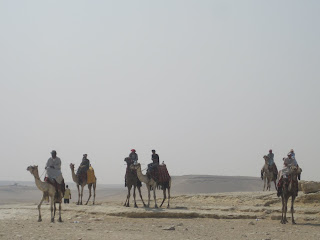 Camels and Tourism Police surrounded the perimeter while peddlers hawked their wares for "very good price." Hany, our guide, had warned us to be on guard here. That "very good price" quickly went up and thievery was not uncommon in this clime. As we walked from the bus toward our first destination, an earnest and kind Egyptian handed me a small blue scarab then asked how many children I had and handed me another for my 2nd child. As I continued my walk, he handed me more gifts for my son and daughter as I graciously thanked him while keeping my stride. Finally he was through handing me presents and I kept walking. Then the quiet request came, "Just a small amount of money, please?" "No, thank you," I replied and handed back the treasures. Our dance of commerce had ended with no monetary exchange and only the memory to remain in my heart.
After viewing the Great Pyramid, we went to the vista point and saw the six pyramids all in a row with the mother's tucked safely behind their sons. Hany filled us with details and facts and then Regina invited us to pause with the silence. Pilgrims spread out, some sat, some stood, all gazed. Sitting side by side on the retaining wall, Regina and I let the breeze lift our spirits as we felt the feathers of Ireland and eternity swirl around us. 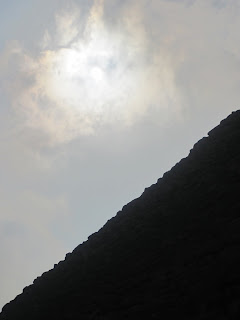 The magic continued as it was time to visit the inner chamber of the Second Pyramid. Well-prepped by our guides, we knew it would be a cramped and potentially strenuous path. Nine brave souls entered the opening toward the tomb. Crouched in a slumped walk to fit under the 4-foot ceiling , my head gently bounced off the ancient stone until I found a more pleasing rhythm to make my way up the ramp. Following my roommate, Deb, we kept a nice pace while still pausing to touch the solid walls where so many hundreds of thousands had gone before. A few yards crouched and a few standing up until we entered the sacred chamber.
Barren except for an empty sarcophagus and a few modern lights, it felt like we had entered the center of the earth. No claustrophobia for me, only a beckoning from the far wall to place my hand-print in the space where others hands had lain. Next followed my other hand and then my forehead until I was locked in a slow dance with this ancient mystery. The quiet was profound and immense and it held for several moments - long enough, in fact, that I finally opened my eyes to see if everyone else had evaporated. Yet there stood my fellow compatriots - Deb, Mary, Don & Marie-Josee. We had been granted a miracle moment. With thousands of tourists outside, this handful of pilgrims were offered the gift of silence and connection inside this ancient wonder of the world.
I slowly moved around the perimeter, stopping by the open burial crypt and proceeding clockwise until I stood before the very place of my slow waltz. There above the invisible impression where my forehead touched the cool stones was the word I heard the day before inside the Alabaster Mosque - BE. Just a few unremarkable letters were inside this sparse space, and I chose to stand below - unbeknownst to me - the very letters that chose me the day before. Blessed Be. God is in this place. I tapped Arleen (who had drifted in) upon the arm and showed her my confirmation. Goosebumps ran down both our spines. The magic of this place continued... 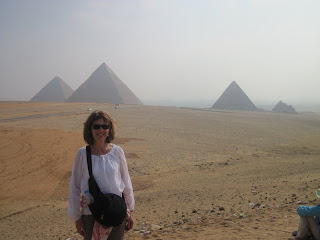 Finally, the still small voice inside me said, "Enough" and I knew it was time to go. Just as I exited the chamber and started down the narrow ramp, hoards of Japanese tourists pushed past me and I knew the silence of the chamber was no more. Blessed be. O'Donohue's words were perfect for this day, "A new silence goes with you..." And the serendipity continued as I read the bookmark given by Regina that day:
"These sites that call forth reverence and awe and humility and wonder, we make them sacred, and the ancient ties are never lost, the oldest voices calling from within the stones." James Houston

What are the sites that call forth reverence, awe, humility and wonder for you today? It certainly doesn't have to be inside a great pyramid. Remember, a new silence goes with you each day...

Thank you for taking us with you up that four foot high ramp into the burial chamber. I could taste the silence.

I have found that kind of reverence, awe, humility and wonder in old Romanesque churches in Europe. Stone holds so much of humanity's history.

I looked upon Mesa Verde, home of the cliff dwellers, with the awe and wonder you mention.

what a blessing that you got to be in there before the busload of tourists :)

barbara - i wonder what it is about stone that holds history so well? thanks for journeying with me!


maureen - we saw caves throughout the desert that i imagine were once indwelled by desert fathers and mothers - definitely awesome!!


kel - the crazy thing was the parking lot was FILLED with buses yet we managed to have several minutes with just a few of us present. glad i was on the pilgrim bus :-)

Oooh, love that miracle moment, Lucy. My legs feel all tingly after reading this :)

What is calling forth reverence, awe humility and wonder for me today has been watching some video about the inner workings of a human cell, the deep, unbelievable complexity, the dense, dense, dense concentration of information that makes up the DNA, the way the different components of the cell like little amazing machines open up the DNA, get the "recipe instructions", and go to it replicating cells. Just absolute absolute amazingness. That leaves me in awe of Godde :)

Being alone in nature--in the woods, by a river, on a mountain, whatever--but alone--that gives me that sense of awe and connection.

hey sue - it was definitely a "tingly" moment!! oh and the wonder of DNA... i continued to be amazed by the seemingly small things & their AWEsomeness. it doesn't get much smaller than dna, huh?

so glad to have your 'voice' here again!!!


karen - sounds like you have some other places where you find utter contentment, too. in a world where most people fear being alone, it is incredibly beautiful to see your sense of connection and awe when you are alone.

Your description, I believe, may be the closest I ever come to the interior of a pyramid.....not because I won't be in Egypt but - the interiority (is that a word) of the space does not draw me to long for that particular space. It is a beautiful reflection of the awe and mystery you felt in the place. Ancestors seem more and more relevant to our lives, don't they?....even when they are ancestors from a world we've only read about and never really thought we would actually see. I repeat, I'm loving living this adventure with you through these posts!!!!

hey SS - did i hear the word "never" anywhere in there? ;) i found the sense of wonder thoroughly erased anything else!!
oh, the ancestors were definitely making their presence known throughout this entire journey!!! xoxoxo