Pedrita gazed upward into the night sky, pondering the question: When will I ever learn to fly? Her nights were dream-filled while her days were spent in the barnyard surrounded by fellow swine. The others passed their hours trudging back and forth between feed trough and mud pit. They slogged through the days mimicking perfect barnyard behavior infused with virtually no enthusiasm. 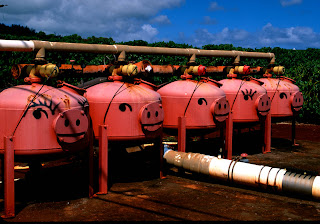 Pedrita, however, knew she was destined for more. Instead of snarfing down her slop, she would pause and be curious about where her meal had been before. Whose leftovers was she sharing? Did the grains come from the field over there? Was her mother gluten intolerant? Is that why she's so cranky? Pedrita spent her waking hours pondering and pondering and even though the other animals made fun of her and called her whacky, she offered them kindness and gentleness rather than matching their derision.

Every night she would gaze into the heavens and imagine herself floating among the stars. She could see herself reflected in the constellations and knew she was special and shiny. She tried to tell her friends about the magic night sky, but they were more concerned about the next meal and what everyone else was doing. Ped, however, would not be dissuaded. She continued to dream her dreams and wish upon the glowing stars. She saw beauty in everything and offered compassion unceasingly, even to the piglets who laughed at her wistfulness. Nothing could deter her from reaching for the stars.

Each evening while standing under the moonlit sky, she offered compassion to the whole world - especially the parts she didn't understand. She sincerely believed we are all made of stars, and as she nurtured this belief something gradually changed within her. Her heart sprouted wings and under the winds of generous compassion, one night she defied gravity and rose to join the twinkling lights of the sky.

She quit trying to convince others to change and went about her days seeing her mates perfect as they were with all their slogging and slopping. By day, she was a simple swine reaching out to others through curiosity and kindness. Little did they know, however, that through these daily actions she nurtured the incredible lightness of being that carried her, Pedrita the pig, soaring through the starlit nights.

Inspired by Pedro's prompt: When will pigs fly? And will we fly alongside them...

Kayce, this short fiction is just so lovely, inspiring and delicious! And who would've thought that a simple prompt to ponder could originate such an avalanche of imagination and creativity?

No surprise with you, though. You are a true creator. A true artist in ways spawning more than the mere meaning of the word and its evocative domain...

You don't only gave birth to Pedrita: you were the genesis of her identity, her philosophy, her winged aspirations...; of her dream!

Nothing is impossible in the mind of a creator. Nothing will be impossible for you, dear friend.

A woman who can envision, grasp and taste the sweetness of wonderment, originality and compassion, is a woman destined to experience and give great contributions in and to the world, at large.

Don't be surprised, then, if one morning you wake up and realize that all around you is magically blissful and that the people and the things that surround you are hopelessly grateful and in love with you and your brand of magic... After all, you do make pigs fly and I was flying right alongside this most remarkable and uniquely qualified new species of winged pachyderm... What a treat!