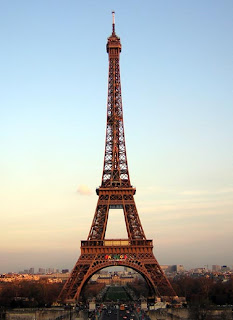 “Twenty years from now you will be more disappointed by the things that you didn’t do than by the ones you did do. So throw off the bowlines. Sail away from the safe harbor. Catch the trade winds in your sails. Explore. Dream. Discover.” --Mark Twain

Well, dear readers, you cannot imagine where this quote (seen yesterday at Anchors and Masts) has taken me in the last 24 hours. I read those words and my mind was off to the races. The long and the short of it is, I think I am going to Paris…in four weeks…potentially alone. Now for some this might seem like a normal event, however, I have never been to France (or any other European city except London and I am not even sure Londoners consider themselves European..somehow I think not.) But I digress. I have been talking of going to Paris for a few years now. It has been on my ‘short list’ per se.

Why now, you might ask? Well, why not?? I have had nearly two weeks blocked out on my calendar for several months for a trip with friends to Mexico. That trip fell through this weekend and I will be darned if I will let two wonderfully open weeks, set aside for pure enjoyment, go to waste! So, I checked airfare to London. Cheap! Then I checked airfare to Paris (which is where I really want to go). Cheaper!!! In fact, I can go on frequent flyer miles for a total of about $75.

The brave side of me says, “Go for it!” as does my dear, wonderful supportive husband who really has no interest in going to France nor can he disappear from work and home quite so easily. But the insecure side of me says things like, “Are you crazy?” “You only have two years of high school French” “Where would you stay?” “What would you do?” “You don’t even know which side of the Seine the Eiffel Tower is on!”

And then I think of brave, women like Elizabeth Gilbert (Eat, Pray, Love), Alice Steinbach (Without Reservations) and Anne Morrow Lindbergh (Gift from the Sea) and I realize this could be an amazing adventure…And then the not-so-brave voice steps back in.

So, here I am with a ticket on hold and two weeks to make my decision and just over four weeks to plan a trip. It feels like “sailing away from safe harbor” and I can see my inner sails filling up with the trade winds. My inner poet is saying, “Yes, yes, yes!” My practical side says, “I need to put dinner in the crock pot.”

Go for it! You're ahead of a lot of travelers - you know there is an Eiffel Tower and a River Seine.

My practical side says I'm not keen on you traveling alone......but you have to decide that.

i love your initial response...which is mine too. you could remedy the practical side by coming along with me :-)

I think you should do it - make the most of the here and now!

lest anyone think your DWSH is a francophobe...i would love to go but you've seen the calendar this year! if i had any reservations you demolished them by (strategically?) invoking the name of and a quote from one of my minor deities - mark twain that is. via con dios my dear - don't look back!

No doubt about it lucy, you MUST go to Paris. I spent a semester there while in college, and while I was a French minor and was pretty fluent in the language at the time, I found that *everyone* spoke English there, as soon as they heard my accent they would switch and I was frustrated because I wanted to practice my French! That was 20 years ago and I have no doubt English has only grown there. I'm going this summer so you'll have to tell me all of your wonderful discoveries!!

Lucy, go to Paris!!! Although it is a city of Love and would be best enjoyed with your husband, have a wonderful time. My experience was food is great, almost everyone is friendly and speaks wonderful English and it is very easy to get around. My daughter said the Hostels were good and inexpensive although you need reservations. Our hotel room was small but expensive. If you go let me know and I will tell you the 'Must Sees!' Love, Pamela

Oh, yes the thought did cross my mind - the accompanying part that is.....but my Feb is all about Maui this year. I'm quite certain you're on your way with all of this encouragement. Sherry at Sage and Thyme.blogspot.com did an Eat, Pray, Love also that would definitely boot you out the door if you hadn't already made up your mind. oxoxoxoxo

The only thing stopping you is fear. So a whole lot of irate Frenchpeople will get aggro at you cos you can't speak French properly? Learn a few French swear words and you'll be right.

I have wanted to go to France forever and ever.

Does the thought give you a tingly magical feeling in your tummy? Then do it. You will be fine on your own, a French phrase book will get you through, and you'll soon figure out which side of the Seine the Eiffel Tower is on. Your soul is speaking to you--listen to it.

I read your blog and felt giddy with adventure for you. I like what Karen (above me) has said: "Your soul is speaking to you... listen to it" Couldn't have said it better myself. Thanks for your kind words on my blog - remember the fool! I definitely think 'go for it' (I also have a friend in Paris, and I could ask if she would mind me passing on her number, so you have *someone* to call if you're worried about anything!)

Thanks for your lovely comments on my blog. And YES, come to Paris! Don't worry about a thing! But bring comfy walking shoes and a warm jacket and scarf. It will still be cold when you're here. Am emailing you now.

karen--i do have that tingly magical feeling in my tummy :-) i also have already figured out that the eiffel tower is on the left bank. what more does a girl need to know?

penny--please join me in this adventure if only vicariously. your giddiness is contagious :-) and thank you for your offer re: your friend...if you read a little further in the comments, you will see i now have a new friend in paris...paris parfait.

this is so cool i can hardly stand it!!!

paris parfait and i are already corresponding, so i think i may have to go ahead and push the "buy" button on that airline ticket!!

to all who have commented---you are the best cheerleaders a girl could as for and i didn't even have to ask :-)

As someone who has travelled by herself in Europe and in Asia, let me tell you it is the BEST WAY to see and do exactly what you want. Don't worry about the language. Politeness and an effort counts for quite a bit. Check out the accessible gargoyles on Notre-Dame and the medieval treasures of the Musee Cluny. A good map and a guide book is all you need to do your planning.

I knew Paris Parfait would kick you right over the goalposts!!:)

Lucy don't look back! Do it! Feel uncomfortable, bothered, afraid but still do it. Everything unfamiliar is uncomfortable but it is in braving that discomfort that we grow the most. Listen, I just discovered your blog. I am a middle aged woman who has become a mother for the first time in her life. What a wonderful journey. I who only lived for travel and never wanted anything or anyone to tie me down, now find that in treading into the unknown, I have found my greatest joy. GO! Pack your bags girl!

My 2 cents, although I'm not much of a traveller.

#1 Anyone with a blog named "Diamonds in the Sky with Lucy" sounds like she should have at least one Paris adventure.

#2 From what I've learned about you through your blog posts and comments I think you'd be a gracious, graceful and lively American in Paris.

barbara--i really appreciate your words of encouragement especially from one who is in the know :-) thank you for the specific recommendations. i will look for those gargoyles and photograph them in your honor if i am able (i doubt if they allow cameras in the museum :-) looking for the perfect guide book already!

salome's mom--i love the energy you have brought in your very first comment. i am a middle-aged woman with two teenagers running out the door...i think it's time for my wanderlust to start being fulfilled. we're all kind of "treading into the unknown", aren't we? look forward to hearing more from you!

elaine--your opinion is worth well more than 2 cents!!! paris is afterall the 'city of lights' and both diamonds and 'lucy' (the name) represent light. sounds like a match made in heaven to me.

i hope i can live up to your words of "gracious, graceful and lively"...sounds like a dancing swan to me...whaddya think?

lucy, GO TO PARIS! I did this myself over 10 years ago...my marriage had ended and my exhusband used up all our airmile points taking his new girlfirend to Cuba!! Boy, was I burned...so I decided to go to Europe on a Monday...applied for a passport on my lunch hour the same day...picked it up on Friday and climbed aboard the plane to Amsterdam on Saturday. I've NEVER done anything impulsive like that before but oh, it was wonderful! I went to Paris and wandered the streets, visited museums, ate in sidewalk cafe's and just loved it.

kate--thank you for that great story sorry it was under such crummy circustances, but hey...sometimes that is where the best things come from. if you have favorite places you'd like to recommend, i am all ears :-)