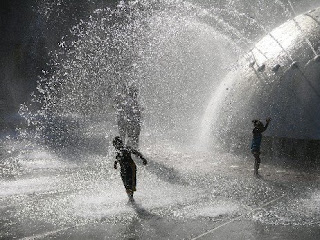 "Let the little children come to me, and do not hinder them, for the kingdom of heaven belongs to such as these." Matthew 19:14

can you remember back to those carefree days when boys and girls were just kids and not genders? can you see in your mind’s eye the freedom of summer and endless play without regard to time, space or commitments? when hours could be lost staring at an ant carrying a piece of food? or catching bees in a jar only to release them a moment later could consume an entire afternoon? can you remember what it was like to walk hand in hand with someone just because it felt natural to be by their side? can you remember when it all started to get complicated and boys became yucky or girls developed cooties? when appearance became more important than freedom? when propriety took the place of simplicity?

some of those questions are easier for me to answer than others, but all remind me in some simple way of my delightful Sunday when for a few brief moments all of the questions disappeared and I got to simply be me…a child at play…if only for a moment.

sitting next to the international fountain at seattle center with my seemingly unlikely companions, steve and derek (two twenty-something young men from lubbock, texas), we watched the children at play in the brilliant sunshine of the day. one little guy especially caught our attention as he darted in and out of the fountain spray clad only in his little white briefs which I swear he had on sideways ☺. oblivious to every care in the world except delight, this little guy was the picture of joy and his energy was evidently contagious. steve spontaneously said, “come run through the fountain with me” and the next thing I knew, we were dodging the showers and laughing with the other children. pure delight indeed!

it is funny how you just know that some moments will mark your life in a unique way and I know this was one of them. it was a brief slice of time slathered with delight and freedom when two grown up children allowed themselves to come out to play and time stood still…if only for a moment.

when was the last time you allowed your inner child to come out and play? if it has been awhile, why do you think that is? what would they would want to do if allowed? think about it ☺. I would love to know.

unfortunately i did not have my own camera with me, but this fountain photo found here beautifully exhibits the mood of the day!

Yesterday, my inner child took my hand and we moulded clay together.
But a time when my inner child totally took over and I ran through a fountain? (Rock on, Lucy!) ... I don't remember. It's been a long time.

But I think she's got a few ideas in store now that we're starting to play together :)

Nice post! Sounds like you and I both had a good Sunday. I just posted mine. Not sure mine qualifies as inner child stuff but it did produce some peace.....

I can picture you doing this. What a lovely moment you've shared with us.

I can't even remember the last time...and that makes me sad. I need to play more.

A delightful moment--thank you for sharing!

karen--i hope you find a time and place to play very soon!! maybe running through the sprinklers in your own yard with that beautiful boy of yours?!??!?!

Moments like these deserve our fullest gaze, our deepest cherishing. Sounds like you did both, I loved sharing them with you vicariously.

Love that Inner Child! (I comment on it in the next post -- I guess I am preaching to the choir again!) When did I last set that Inner Child free? It may not be the last time, but what came to mind was when I put a molecular model (a hexagon in shape) around my head because my hands were full and returned to my office from the classroom. My students were embarrassed for me! hehe

C--this moment definitely held my fullest gaze, complete with running mascara all around my eyes :-)

oh, barbara--i would love to have seen your molecular bonnet! i am certain there were a few people embarrassed for me, but i think there were even more wishing they had the guts to kick off their shoes and do the same thing!!!