This mom is crabby crabby crabby. A stark contrast to the peaceful stillness of only a few days ago. Surrounded by incompetence and teenage angst…not being able to decide whose is whose. The term “mama bear” keeps roiling around in her brain along with the gesture of throwing her arm across the passenger seat to protect her child in the event of a sudden stop. What is it about mother’s that sends their right arm flying into open position when they think their child is in danger? Do British mum’s fling open their left? 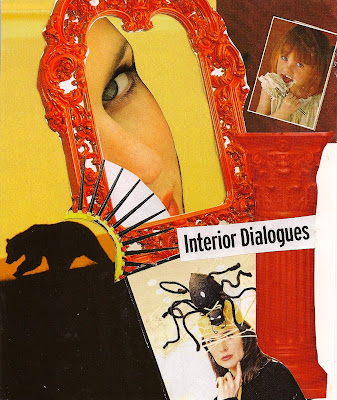 Still she ponders and wonders why the anger has arisen so sharply in the last week. Is it that she is surrounded by grownups battling their own demons and attempting to throw their anger into her lap? At work, they sit and smile, but she feels their seething undercurrent even while they say everything is “o.k.” At school, her youngest battles for autonomy while coming up against the man/boys they call role models. It is enough to make a parent’s blood boil. For sure it makes a mama bear growl!

Still she wonders if she is coddling or letting go too soon. The balance is a tough one. The teen has her own immature hijinx, but here she is called to be the “adult” as she plays the game of high school politics. Yuk! Mama bear wants to step in and give the offenders a big swat of her paw, but settles for a little art making and mental health break instead.

A trip to the masseuse ends with the recommendation of “Take it easy and watch movies all day” ☺. Advice heeded, The Diving Bell and the Butterfly continues the melancholy mood as she finds herself feeling stuck in her own diving bell. Mama bear is ready to hibernate. Like I said, this mom is crabby crabby crabby!

I guess Aussie mum's would fling open their left arm :)

A friend of mine once told me I was a mama bear--and this was before I had a child. It's an instinct with me, protecting those I care about--and it goes beyond blood ties.

Isn't it nuts how quickly we can go from calm to crazy so quickly? I make progress on the calm front, think I have it licked, and then wham--I'm ready to explode.

Actually, that's kind of funny...it's an example of being delightfully human.

I am joining you in the crabbiness today lucy, although mine is of a decidedly different, ahem, feminine nature. So I am curled up with Tune and some vicodin and the laptop doing mindless surfing (not that visiting you counts as mindless) ;-).

Glad you got a massage today, hopefully your body's relaxation will help give you some wisdom about how to proceed.

Ahh yes,
Crabbiness is in the air.
My mama bear pissed off mood comes from hearing that they passed a 400 page pork belly bill that I know will fix nothing and only come back to smak us on the but when my babies are grown with there own families and finances.
Grawwwwwwwwl.
And knowing there isn't a darn thing i can do about it.
Gonna curl up with a good book.( the soloist)
and a glass of white wine too!

karen--oh we are "delightfully human", aren't we?

c--lovely visions of you and tune. i think my crabbiness may have a bit to do with the one month anniversary of dear curry's departure. your cards have been a great comfort this week. thank you!!

sorrow-- i think i shall pour a glass of red myself and maybe find a little lighter reading than a book about children of narcissists :-)

This is officially Crabby day. I wandered into stores shopping for a birthday gift. EVERY SINGLE store had clerks who were upset about something or someone. They all vented with one another. It struck me and now, Lucy, Sorrow and Abbey.. here you are also. I had my crabby day yesterday. I think throwing stuff around the room should qualify as a good hefty crab attack. Try it... i'm fine today.

hmmbrd--oh i think i like that idea of a good hefty crab attack complete with flying items...i choose to be better tomorrow :-)

okay i'm in ... and i'm not suggesting that i'll play along just to be part of this particular group. my crabbiness is legit (at least in my little world here)! spent some time this morning ... actually a lot of time with two women sharing lectio ... one i sort of know and the other i don't and the one i don't know at all was sour and sarcastic and just plain rude. then there were the rude sales folks i encountered twice when trying to transact some business by phone. and it all started off with my beloved leaving for a week to Korea and the knowledge that most of the month of october he will be flying the friendly skies to somewhere. and to top things off, i can't drink a glass of wine ... white or red ... those damn oxalates will give my kidneys fits! so yes, i'm crabby ... crabby and feeling sorry for myself and really lonesome. harumpf!!!!!!!

I often find myself in this position. Zen and peaceful one day...then crabby and angry a few days later. Oh how I wish I could be all zen all the time...but thanks to PMS and hormones...well enough said!

Aw shucks Lucy, I was hoping to see a picture of some bears.(for real) The only thing that get me out of a mood like that is either meditation or an all out temper trantrum. TOWANDA!!

caroline--there's no stopping being human is there?

thanks lucy! it's good ... sharing with you!

This Mama Bear having spent a few, too few days, with her eldest cub came home very sad and sorry at the miles that separate us.

I too am mystified by the mood swings we humans possess - some days happy beyond words and then crash....we're angry about everything with good reason - it seems good reason anyway:)

Dammit, I missed crabbiness day! I would have had a good time.

And yes, British moms (or aunties) do fling out their left arms.

SS--i know it was hard for you to leave all of those little (and not so little) cubs behind! you're a great mama bear & grandmama too!!!

tess--not to worry. i have a feeling another crabby day will come around. i mean think about it...lucy is kind of the queen of crabby :-)

& what is it about that arm flinging anyway????