another good-bye OR end of an era 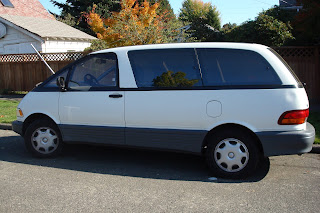 This time the good-bye is not one of living breathing sorts, but rather it is a farewell to our 1993 Previa mini-van. As of today, I am officially no longer a mini-van mom. It is with mixed emotions that I say this farewell for indeed it feels much more like the end of an era rather than the sale of a car.

I can still picture the day nearly 15 years ago when my husband called and asked me to come test drive this gem he had just found. Things moved pretty quickly and before I knew it, he had returned to work and I was left at the car dealership with two very small children (aged 4 and one.) The three of us were there for what seemed like hours, but at the end of the day I was no longer a BMW-driving yuppie and had officially joined the ranks of Soccer moms everywhere (even though soccer would not be introduced into our lives for four more years.)

It feels funny to have this little tug pulling at my heart as I sit waiting for the new owner to come pick up the car. As I wait, my life (or at least the last 15 years) seems to flash before my eyes. I can feel the hundreds of trips between our home and the little Christian elementary school both kids attended. My daughter and I picked Curry up in this van. His favorite spot became the space between the driver and passenger seats where he regally held court as we went through many a drive through and he was lavished with doggie treats while the kids received candy or stickers. I see the road trips we took--traveling as far as Penticton, Canada for the Canadian Ironman and south to California for Christmas with dear friends. 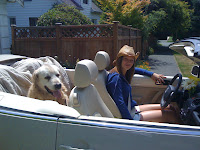 My kids grew up in that car and I guess I probably did too. We considered saving it for our son to drive, but the thought of a teenage boy with all that space stirs up memories of my own youth and I shudder at the thought. We have considered selling the car for more than a year now. In the back of my mind, it seemed in many ways to be Curry’s car. He never liked sedans or smaller vehicles until he experienced the joy of my VW convertible. In later years he could not climb into taller cars and so we kind of kept the van around—just in case…

So, 'just in case' has come and gone. It is time to say good-bye. Good-bye to the van. Good-bye to an era. That car is full of amazing memories and I hope many more will be accumulated as I turn it over to its new owner—a mom with three small children. Her brother knocked on our door last night inquiring if we would like to sell it. Evidently his sister’s car (another Previa) had been totaled by a drunk driver and they have little money to spare. We had a family conference to decide if we would sell it for less than ½ the blue book value to a man who was potentially scamming us. My daughter put things in a way only a teenager can when she said, “Really…who would try to scam us for that piece of you know what!?!??!?” My thought was that even if it was a scam, the man appeared to be less fortunate than we and my hope is that the new/old car would somehow benefit him and his family. (Gee, that sounds more magnanimous than I really feel! ☺) It also feels like time to say good-bye. Time to do a little de-cluttering as Sunrise Sister has recently reminded us.

Well...the car may be gone and the street therefore a little less cluttered, but the memories will last a lifetime (especially since I decided to write a few of them down ☺.)

Aww. You have a sweet heart, Lucy. I'm glad you sold them the van even with that funny "am I being scammed?" feeling that often hangs around thos vulnerable times.

Love the photo of Curry. A bit bittersweet, yes?

Heh :) The word verification for this post about de-cluttering is "strip" :)

Cars/vans/trucks - moving vehicles of all sorts play heavily into our histories, don't they? Very strange the memories we attach. We chauffeured a family of five foster kids around in a "borrowed" van for about 6 months and then found that since the kids were always around we better buy it rather than to pretend we were just borrowing it. When the kids were sort of gone, two adopted and 3 others off in different directions, we sort of found another home for it with the church's youth director. All in all, the van had many happy memories for us as well and I had many friends laugh at me while the sort of real luxury car languished in the garage in favor of the van and lots of riders. Thanks for your memories and making me think of mine:)

a lovely testament to the power things carry in our lives as sacred vessels for our memories.
xoxo C

You reminded me so much of me and my ten-year-old car, that is conking out bit by bit.
It's what we call a small people carrier, much bigger than I need.
I bought it when my aunt and my brother were still alive and needed a comfortable car to be ferried around in.
My sisters' two big dogs, Paddy and Scuba, would be taken to the park regularly, and hordes of teenagers driven around.
Now it's only me that ever uses it, and although I used to moan about my chauffering duties at the time, I kind of miss them on the quiet.

The picture, and thought, of the Previa bring first to my mind a very dull iron man in the way back seat. I'm referring not to the event, but to the tenacious person who completed the adventure in Penticton. The jokes and conversation were lost on that weary warrior. While others bantered and laughed on the trip home, that exhausted body could barely support consciousness. What a grand adventure it was for all!

The next most prominent "Previa" memory is another trip to an athletic event some distance from your home. I recall a young dog who had recently discovered his instincts regarding water. He slept calmly on the floor until we came near a body of water. Just the smell of a river or pond brought him to his feet to see if it was time to swim, or to chase fowl. At the destination, he got to do both with vigor.

Those are a couple of enjoyable memories from the "Previa" days. Cars wear out with time. Some of the memories don't.

It's strange how we become attached to stuff--I remember being sad about saying goodbye to my Chevy Sprint (the first car that was completely mine).

sue--thanks for the words of encouragement! no good deed goes unpunished :-) (the guy actually called and wanted us to split the cost of repairs AFTER we sold it to him for less than 50% of its value!?!?!)

the photo of curry is one of my absolute favorites. it was taken about a month before his death.

SS--i had forgotten your foray into van driving. thanks for sharing!!

C--i love thinking of this as a vessel of sacred memories. it seems quite apt. thank you!!!

tess--it seems like those larger vehicles carry many memories along with the people and animals that inhabit them along the way!!!

GD--thank you for those vivid memories of the minivan. yes, that ironman was pretty "dull", but happy (& stiff) as a clam!

there was still dog fur embedded in the carpets when the car departed from here. it was definitely curry's realm during his reign.

karen--i think i prefer thinking of the van as a "sacred vessel" rather than "stuff" i want to cling too...somehow it sounds slightly less materialistic or pack rat-ish, if you know what i mean. ;-)