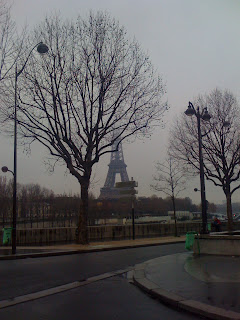 “Breathe deeply,” said Aurore (my Paris hostess) as we parted ways. My first walk out of the neighborhood found my local patisserie, Jean Millet, closed. “Quelle horreur!” I thought it must be closed on Friday and found that I could not bring myself to enter another café. And so, I walked around and said good-bye to the Eiffel Tower from the first place I saw it at Pont de l’Alma. The morning was gray again like when I arrived only not quite as wet and rainy. I stood on the bridge and watched the people heading to work. I’d like to believe I did not stand out as l’Americain. This had come to feel like home.

I returned to my apartment for a quick stop and resigned myself to going to Starbucks down the street. At least I could do a little comparison shopping at a semi-familiar place. I was not willing to risk having a mediocre cup of coffee at a new café--rather to have something vaguely familiar. And then I saw it—the night time bars removed from my favorite haunt and “Voila!” they were open for business ☺. 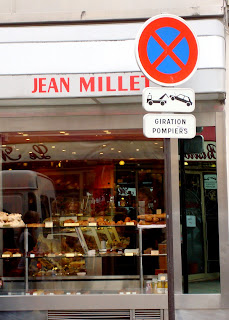 I finally felt confident enough to use a little more French with the Madame.
“Comment allez vous?”
“Bien et tu?”
“Tres bien,” I said, but in truth I was a little sad. Still I ordered my breakfast. “Je voudrais un grand café au lait et un croissant, s’il vous plait.” (This was a far cry from the stumbling, “Uhhhh????” of a week ago ☺.)
For one last time, my coffee came in its beautiful China cup. The espresso served first followed by the little pitcher of warm milk. The croissant tasted especially buttery and fresh this morning. Pure heaven!

As I prepared to leave the café, I told the shopkeeper that I loved her shop and thanked her for her recommendations as well as telling her it was my last morning. She said, “Wait! I have something for you. You will like it—a souvenir to take back with you.” She left and came back with a straw “Jean Millet” tote bag and a nice little French pastry cookbook. Tres bien!

As I left the shop, there was one more surprise for me—Madame Martine and Ginger were coming up the street. I said, “Au revoir and it was a pleasure meeting you.” Martine told me not to be so sad for leaving Paris. It would always be there.

“It is in my heart”, I told her.
She said, “See you again. You will be back. Same place” and she pointed to Millet.

Nothing will ever compare to this first amazing trip. It was exactly what I needed to do for me. As I walked through rue Cler slowly breathing in the morning, I knew that I was a different person than the one who arrived eight days ago. I was more of me. It was like I found a piece of myself that had been tucked away for awhile. 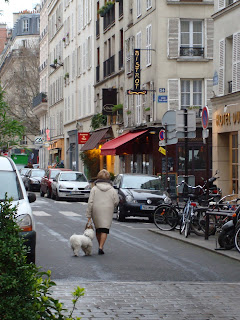 I strolled once more through the market. The locals had their shopping carts and the dogs were out en masse (in a very lovely sort of way.) It was a little drizzly and threatened to rain, but that never happened. I visited the streets that were foreign to me a week ago that now felt like home. I snapped a few more shots—stalked a few more dogs—enjoyed the lovely aging people. As Tess said, “The older women are not ‘invisible’ here.” (I think I would love to grow old in France with my little shopping cart and sensible yet still stylish shoes ☺). 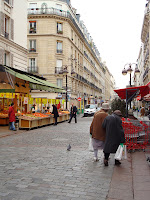 When I turned the corner to go back to my apartment for one last time, I saw the taxi. My taxi—15 minutes early. The cab driver was polite, but not talkative. The trip to the airport felt like the final scene of a movie complete with operatic soundtrack. We toured through the Right Bank (a place I spent very little time). I saw sights I had missed along the way—the couture houses, Hermes and others. Then up the Champs de Elysee and back to the Arc de Triomphe where it all started. 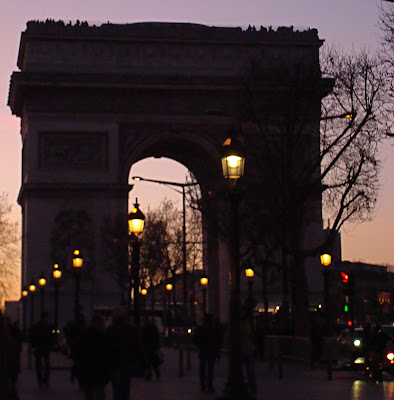 Reading this makes my eyes a little misty. I'm so very pleased for you that you were able to make this trip, and to find that missing piece.
And so happy that I was able to share a few days with you in the middle of your trip.
Au revoir my friend, see you soon.

Lucy, so glad you are home safe and sound but it also sounds like you found your 'home'! It was wonderful of you to share your journey! How about Italy next?!! Love, Pamela

Lucy, I felt like I was leaving Paris too when I read this...I was choking back the tears and had a huge lump in my throat. I remember that feeling of belonging after a short time...it becomes your apartment, your neighbourhood and your town when you have the sheer luxury of immersing yourself in the place and the culture.

So, so, glad it was all you hoped for and even more.

Yep, you made me cry! But then you know I'm that kind:) It was a perfectly charming departure narrative, but you are correct - a sound track would have been perfect. But it could have made it just too weepy also!

(I bet there will be some favorite tunes that emerge as Paris reminders - you'll share those too:)

Dear Lucy. I thought of you earlier today and wondered if this was close to your last day in Paris and saw your blog post when I got home. Thank you for sharing your adventures with us every day. I'm not able to take a vacation for the next while but anytime I need to escape, I'm going to reread your posts. I think you could make a book of them. Safe journey home.

SS--no joking--there literally was opera music playing in the taxi as we drove through Paris for the final time!!!

tess--each time i read it, my throat gets a little tight. it was such a fabulous adventure and you were much more than a small part of it!!

pamela--italy sounds wonderful, but i think i will let this one sink in for awhile before i start planning :-) also, i never was able to find that gold ring at notre dame nor any info as to its whereabouts. what do you know?

kate i--yep, it all became MINE, because it really was like living there!

SS--there's definitely a soundtrack in the making :-)

elaine--i know i will be so glad to have these posts for myself whenever i begin to wonder if it was really real...glad they can help you with a bit of escape & hope you can get some vacation of your own in the not too distant future!

much love to all. i am so glad you came along with me. xoxooxoxo

Welcome home mon amie, I am so glad you are safe and sound. Your words this week have been so moving and have reminded me the power that a place can have, and the personal empowerment of realizing a dream. I know claiming this adventure for yourself is going to overflow with gifts in the rest of your life. The gifts of Paris to you will be touching others for a long while to come.

But next time we need to go together! ;-)

I got teary as I read it--thinking about my own excursions overseas, coming to love a place, having to say goodbye.

It does our soul good, doesn't it? Exploring a new place?

I've got tears in my eyes, too.

One day, Lucy, I would like to meet up with you in Paris.

I love that "older women are not invisible here." That is SO cool. OK, let's make a pact that we will never be invisible! (BTW, Lucy, I have been enjotying your pictures and words throughout your trip ... though time has been a factor in communicating with others lately.) I see that YOU are no longer invisible, as you have exposed yourself in a photo. Also, it has been tremendous to follow you on this journey, as your life has been enhanced - by not only taking in the physical surroundings and tremendous beauty, but also through your interactions with others. I am REALLY happy for you, my friend. LIFE IS SO GOOD!!!

As far as the poodle thing goes, I decided long ago that in the future, when I will no longer dye my hair, I will be walking my standard poodle, black in color (probably to remind me of what I looked like prior to embracing the gray hair), and she will be wearing an sparkly collar. Really, only poodles can pull this off.