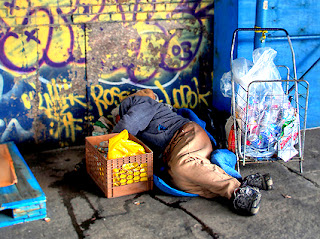 Entering the downtown parking garage after an evening with friends, the smell of urine was over-
powering. As I turned to my husband to comment, there was a flurry of movement and from out of nowhere came a man who now stood between the exit and us.

“You guys got any money?” He said in his gravelly voice and before we could even respond he had jerked up his shirt and was showing us his heavily bandaged chest.

“Got blown up in the war. Come on, guys just give me some money.”

It was only earlier that day that I had written about no longer being able to ignore the homeless man in the street. And now, here was this man making certain that we would not ignore him. His movements were erratic and we were alone in an isolated, dark garage—only the streetlights from outside lit where we stood. His eyes were outlined as though someone had drawn around them with a bright red marker. His body was wiry and he was probably not much taller than me and there was something dangerous-feeling about him. It was desperation.

How do you respond to desperation? How do you have a conversation? Suggest a cup of coffee? Hand over $10? For $10 would not ever be enough. Enough for what? A score of crack cocaine. A decent meal. A bus ticket out of town. His lost dignity.

My husband responded, “I’m sorry, but we don’t have any cash.” The interchange—request for money and refusal—was repeated a couple of times at which point the man clenched his fists, made a grunting sound along with a short, quick punching motion, started to leave and then said, “Hey, you guys Christians?”

What could we say? We said nothing and then he was gone.

I say ‘he was gone’ and yet he has not left my mind for more than a few moments in the four days since this happened. I feel strong compassion and care for this man who represents thousands of others on the Seattle streets. I do want to make a difference, and in the moment, I feel as if we did nothing. We were stunned. And scared. We felt trapped and potentially in danger. Trapped.

I cannot begin to imagine what it would be like to feel trapped and desperate every moment of the day. If money is not the solution and conversation/relationship not an option, what else is there? What will I do the next time I am faced with a similar situation? What will I do in the meantime? Can caring be enough, as Brian McLaren says?

“Just caring is a good start. That’s a real start. Who knows where it could lead.”

I look forward to seeing where this caring leads, because not caring is no longer an option.

I’d love to hear thoughts from you and ways you see that are making a difference.

Everyone involved was trapped in an impersonal world. How would I respond to a threat, or even my perception of a threat? I think I would respond very much as you did.

Whom shall you help, those who squander your help or those who honor it?

thank you, d, for your thoughtful response. so true, "if i didn't care, the choices would be easy."

lucy and geezer - you make a person's eyes water...can't say more now as my mind is spinning and my body physically feeling the messages in both of your words. Thank you!

I think most everyone cares, but it's not going to help. He needs somewhere to live (the option of sleeping indoors and of having a bathroom/shower, an address, access to a phone, etc). Most of these will fall through the cracks and just simply die one day, or do something drastic enough to be jailed or killed over. If one isn't sleeping well/enough, nor eating well/enough, one isn't going to be thinking well/enough.. and if he adds drugs or booze to that, well, he's pretty much dead.

A friend has suggested that our bazillions of near-empty rectories -- or at least parish halls -- be offered as nighttime shelter to the homeless. Most most most especially in winter.

There'd need to be male parishioners or someone to oversee the room(s) each night, but that would be a good start. The parishioners would donate anything needed, this much we know. And there could be employment found for some, medicine, dentists so they can eat real food, we could add showers to the parish halls..

I believe a church or two out west opens its doors to the homeless overnight.. they sleep in the pews. Why not? We MUST do something differently. The homeless girl I took in, from under a bridge and subsisting on catsup and mustard packets, was 18. There are many 18 year old boys under bridges, too.. and soon, in jail.

All shelters are filled to the brim... most with families, now. Time for a Democrat in office, yes, tho' our choices are spooky, but we must do something more and differently, please, God.

justme--thank you for your passionate response. after reading your first line "i think most everyone cares," i wondered 'do they really?' i am not sure that is the case. it is only in very recent times that i have become able to even consider caring from a deeply profound place...a place that i believe can make a difference if the world allows itself to feel its depth.