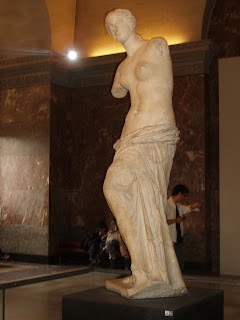 ...how the Venus de Milo got revenge.
It was Monday morning and most museums in town were closed except for the Louvre. It would be crowded, but Tess and I had our plan. We called it “the bullet approach.” We had mapped out the Mona Lisa and the Venus de Milo. We would arrive early on our direct bus route (after, of course, stopping off at Jean Millet for croissants and café au lait). Our museum passes in hand, we would “shoot” in and out and save the rest for another time.

We were excited, giddy even, like two kids who were about to do something naughty. Everything was going according to plan. There was a line by the pyramid for ticket purchases, but the guard pointed to our special entrance…no lines…no waiting. Perfect. We were in! We picked up our museum guide (just in case) and headed up the stairs. Before we could even prepare ourselves, there she was…Venus de Milo…in all her glory.

I reached in my bag for my camera, hit the power button and it was at that exact moment that Venus decided to get her revenge for even considering “the bullet approach”. Like a slow motion film clip, the camera started to slip through my fingers. I reached too late and heard the crash of metal against granite. Not a pretty sound. Quelle horreur!! The camera hit the hard floor just as the lens was opening and just like that (in the blink of an eye; the slip of a hand) my photo taking adventure had come to an end. 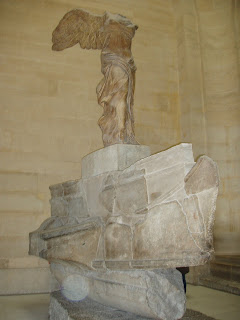 It was a sad, sad moment. Frustrating. Maddening. An attempt to dampen my sense of humor, mais non (but no). With Tess’ handy camera in tow, we completed our “bullet” tour (even adding Winged Victory) although the timing was slowed down a bit due to much pushing of buttons and fiddling with lens to see if we could get the camera to work again.

"What next?" you might ask. “ From where have all the photos continued to come?” Well, the ones you see here were taken with Tess’ camera. We spent the rest of our morning in search of 1) a camera repair shop and/or 2) a camera store. It definitely led us to parts of Paris we had not intended to visit and we met several helpful people along the way who we would not have met otherwise. We kept reminding each other that every day is perfect in it’s own way!!!

Repairs for my simple camera would take 3 or 4 WEEKS! However, the earnest young saleswoman who spoke no English would not give up and called in 'back up' to help with my camera issues. Between the four of us (Tess, one sort of English-speaking salesgirl, one French-speaking and me), I am now the proud owner of the new generation of my broken camera. It uses the same battery and digital cartridge thus allowing me to miss only the shots in the museum (which Tess covered) and the ones along the way during our camera hunt through Paris.

Crazy stuff. Again feeling blessed in so many funny little ways. I am glad to share this with you and very glad to be able to continue photographing this delightful journey!!! One word of warning, however...if you ever decide the visit the Louvre consider carefully how you will approach it. Arms or no, Venus has amazing power!!!

And, just one more thing…Mona Lisa did NOT disappoint, but that’s another story ☺!
Posted by Kayce aka lucy at 7:31 AM

And what Lucy has not mentioned is that the Winged Victory very nearly picked up where Venus left off. I was walking down the short flight of stairs towards her, camera in hand, Lucy in front of me, when I slipped.
Managed to recover myself and camera without sending Lucy and an entire tourist troupe sprawling at Victory's feet.
Whew!

I presume you set no records in the 3-minute Louvre competition! ;) It is adventures like that that really make a trip to Paris. And every time you use your new generation camera, you will remember it and smile a Mona Lisa grin.

Yes! Watch out for feminine power! Maybe that is the grand message of Venus de Milo. Cheryl

So glad Mona Lisa made the "do not miss" list and that your adventure in the Louvre was even more exciting than you could have expected!

"The Venus De Milo was a beautiful lass, she had the world in the palm of her hands. She lost both her arms in a wrestling match to win a brown eyed handsome man." - Chuck Berry

I am glad that you mentioned whether or not Mona Lisa met your expectations. I was reading and waiting to hear! -T